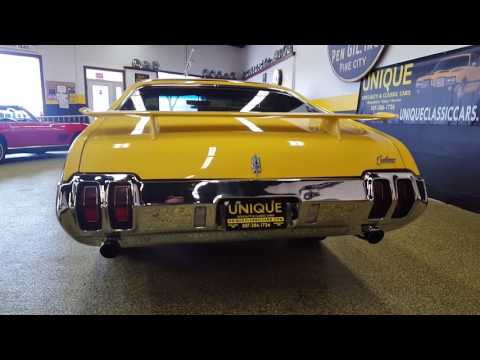 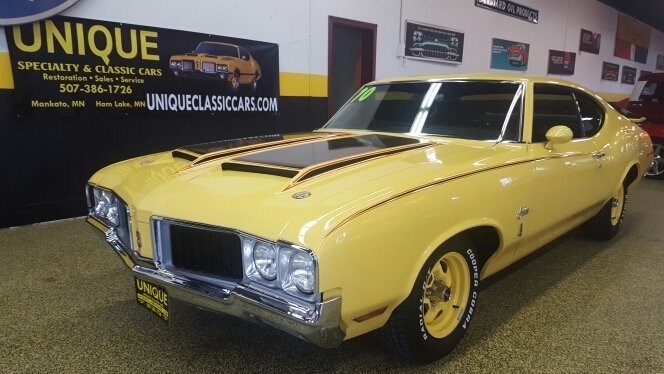 Click here to see video! Here we have a very clean 1970 Oldsmobile Rallye 350 2dr Hardtop just in at Unique, NUMBERS MATCHING! This is a very nice driver quality Olds that you won't see everyday! If you like something that stands out at your local roll-ins or car show this is the one. This one appears very much like it would have when it left the GM dealer in 1970. If you would like to know more about the specific classic feel free to call Jay or Jeff at 507-386-1726 or email sales@uniquemankato.com Here's a little more info on these from the Olds Club of America: The Rallye 350 was introduced on February 18, 1970, by Oldsmobile General Manager John Beltz and made its debut at the 1970 Chicago Auto Show. However, some were built as early as the second week of January 1970. The car consisted of option package W-45, which included blackwall tires, a W-25 fiberglass hood, the L74 350 V-8 engine, N34 Custom Sport steering wheel, D35 sport mirrors, FE2 Rallye suspension, N10 dual exhaust and W35 rear deck air spoiler. All of these items would have been included on a true Rallye 350. Oldsmobile built 3,547 copies of the Rallye 350--a relatively small number that might back up reports that dealers found it difficult to sell the wild-looking coupes, due at least in part to the yellow bumpers. We've heard that, in response to this, some dealers took off the urethane-coated pieces and installed standard chrome bumpers--so don't be too alarmed if you find an original car with chrome bumpers it may not necessarily be a fake. Several Olds experts corroborated the belief that chrome bumpers were retrofitted at dealerships, but there is no way of knowing for sure how many cars received this treatment. What is known is that every Rallye 350 left Lansing with yellow bumpers. As another means of dressing up the Rallye 350s, some dealers installed stainless trim rings on the yellow wheels, since all of these cars left the factory without rings, in keeping with the intended sporting spirit on a budget image. But most consumers didn't have the opportunity to even try to order extra bright trim from the factory, since many Rallye 350s were ordered by Oldsmobile zone representatives many others were ordered by dealers. According to those in the know, very few Rallye 350s were actually ordered by customers, because so little was known about them. That lack of knowledge may have contributed to the lukewarm reception these cars received upon arrival at dealerships. Reportedly, many remained unsold into the 1971 model year. One expert told us he remembers a sea of bright yellow brand-new, unsold Rallye 350s at an East Coast storage facility.