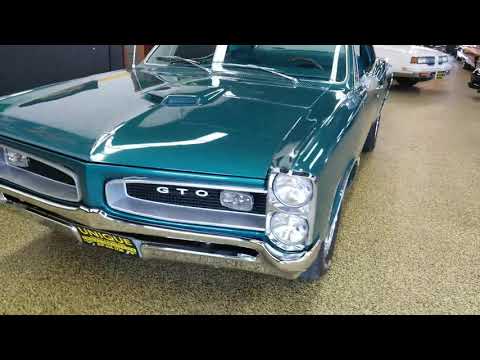 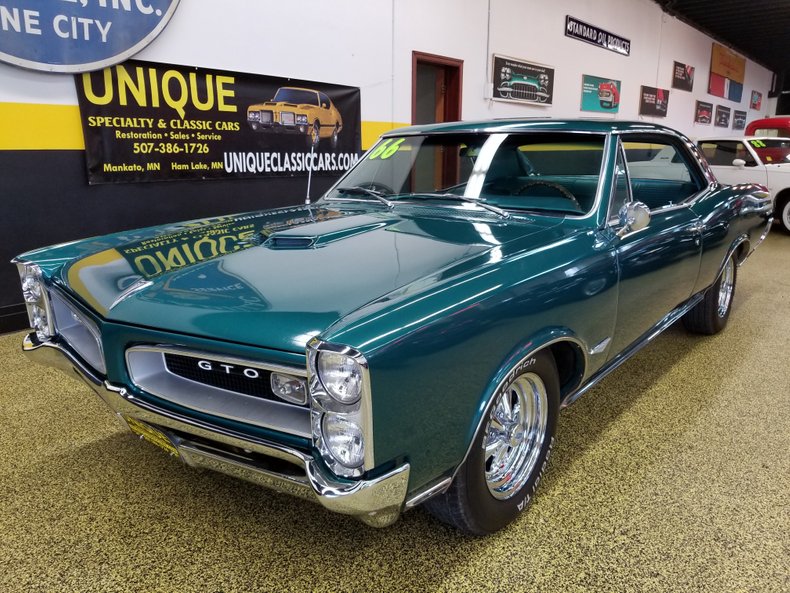 The 66 & 67 GTOs have to be one of the most popular cars we get in because none of them last long and we ship them to all parts of the country! It's definitely a GTO with the "242" VIN and this would have been the first year the GTO was a distinct model and not just an option package. The 66 GTO was the only GM car to feature the rear "louvre" styled tail lights. The front grill frame was alluminum but the insert was made out of plastic which was an industry first. There are a lot of cool features on a 66 GTO so take a close look at this muscle car. This one is a very nice car and we would assume it will go just as quick as the others. We do have the PHS documentation proving that this one still looks very much today like it did when it left the General Motors assembly plant in 1966. It appears to have had a repaint but it is still wearing the Marina Turquoise color and Turquoise Vinyl interior that the PHS docs state it would have originally had. The engine is a 389 with casting code 9778789 which would make it the correct era 389 for the car although a VIN derivative stamp would not have come along until later in 1967. The car is still equipped with power steering and power brakes such as it would have been built with. The 200R4 Automatic overdrive Transmission for more modern day cruising. According to the previous owner whom we traded the car in from, states it has approximately 6000 mile on it since the restoration. Take a close look at all the still pics and the video, this car does look very good in person. We always welcome 3rd party inspectors if you can come take a look at it yourself. Please feel free to call us at 507-376-1726 and ask for Jay, Jeff or Landon. You can also email "sales@uniquemankato.com" ALL OFFERS AND TRADES WILL BE CONSIDERED AND FINANCING IS AVAILABLE