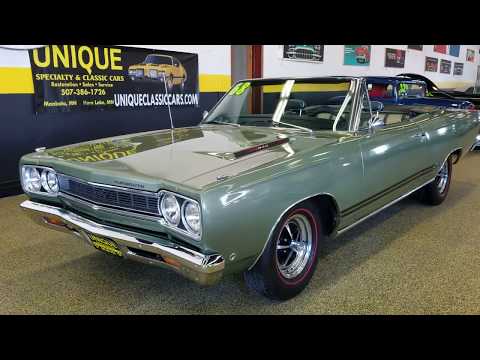 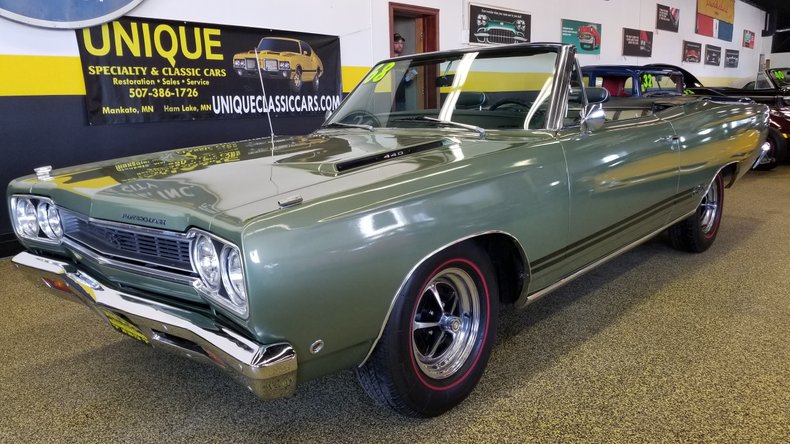 A Numbers Matching Example as Inspected by Galen Govier, Included are the Actual Invoice, Original Broadcast Sheet, Factory Warranty Booklet and Operator's Manual
440 cid, 375 HP, overhead valve V-8 engine, TorqueFlite three-speed automatic transmission, torsion bar independent front suspension, semi-elliptic rear springs with live axle, power assisted front disc brakes with drum brakes; wheelbase: 116”
This example that we offer for your consideration represents the best of both worlds for the collector and enthusiast of Mopar Muscle. With a history that has been traced back to its original owner it was ordered at the start of the 1968 model year, the original sales documents show the car was delivered on December 29, 1967, from Ernie Brown & Son Motors on York Road in Hatboro, Pennsylvania, where the entire purchase price was $3,762.37. When ordered all the right boxes were checked, TorqueFlite automatic transmission, Sure-Grip rear axle, power steering and brakes with discs up front, AM radio, in-dash tachometer, special padded center seat and tinted glass all around.
The original owner moved to California in the early 1970s, bringing this triple green GTX with him, and then kept this car for over 15 years before it was sold to the second owner in 1983. It remained in California and Arizona until 2011 when it was acquired by an owner in Texas before coming to its current owner in Minnesota a few years ago.
In 1990, the second owner of the car applied a new coat of paint in the original Avocado Green and did some other cosmetic freshening of the car as well as mechanical and suspension work as needed to keep this unique Plymouth roadworthy while paying strict attention to authenticity. In 1994, noted Mopar expert Galen Govier was hired to decode the vehicle and provided a complete report confirming the original numbers matching drive train had the same major components that it had been born with. Govier also noted that his research had found no other 1968 Plymouth GTX convertible in the triple-green color combination, making this a one-of-a-kind automobile. Since the car's respray back in the 1990s, it has had some touch-up work on the hood and tops of the front fenders, the paint still remains in very presentable shape with some blemishes but still retains a very nice luster as you can see in the pictures and video.
Today, this car is turn-key ready for the road, after all, that is the very reason it was created. This beautiful example is fitted with Magnum 500 wheels adorned with a set of Coker red-line tires, and a full-size spare tire. Best of all is the paper trail that comes with this car including the original order sheet detailing the options selected and showing that this was a special ordered car by the first owner. Also included is the actual invoice from when the car was delivered. In addition to these important documents is the original broadcast form, or build sheet, that had been placed under the springs of the rear seat during the assembly process, plus the factory warranty booklet and operator's manual. In addition to these documents are the service records for the car from the original owner and much more. One other important item is the original fender tag detailing just how this car was built and showing its rare TT1 Avocado Green paint code and trim scheme.
This car not only looks great but is a very strong driver. This special order GTX is sure to be a heart stopper in a one-of-a-kind fashion, leaving those who miss it… green with envy. give us a call at 507-386-1726 or email "sales@uniquemankato" to inquiry about this car. ALL TRADES WILL BE CONSIDERED AND FINANCING IS AVAILABLE!

•••MN residents are responsible for tax, license and title procurement fees. Out of state buyers will only have a $100 Title Procurement fee, no tax or other fees charged.•••