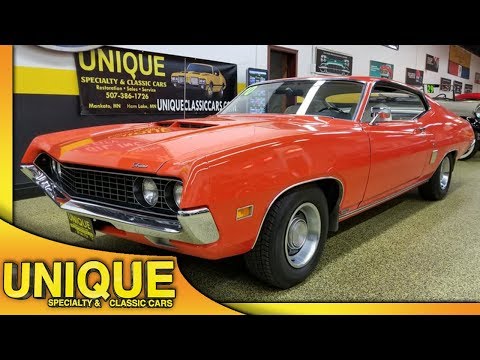 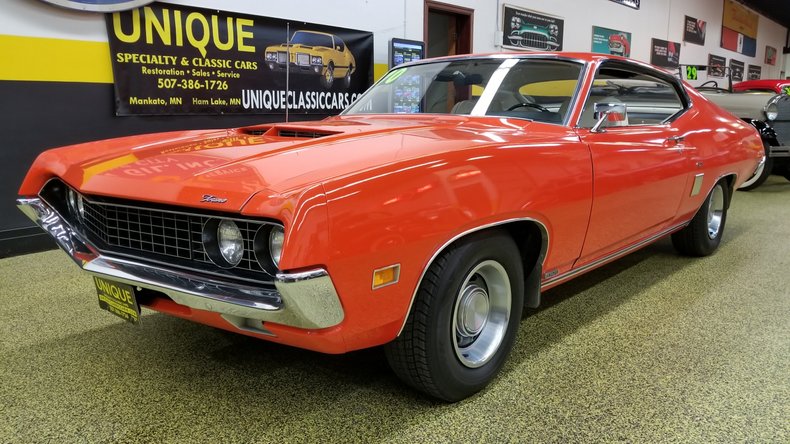 Check out this 2 owner 1970 Ford Torino GT with a 429 and 4 speed. This is an original mile car with one repaint due to a dented fender back when it was a couple years old. This has to be one of the most original unmolested 429 Torinos on the market today! The history of this car is well know as it was passed from the original owner to the current one.

Here is the history of this amazing Torino:
In October of 1970, the original owner of this car was fresh out of the army had a job, had money, and wanted a new car.
He walked into Bob Carter Ford in St. Paul and the salesman handed him the keys to a Boss 302 and told him to take it for the day. He returned the Boss and decided not to buy it that day. He went back within a day or 2 to buy the Boss but it had been sold.
This 1970 Torino GT was on the showroom floor so he bought it. At that time, MN license plates were good from 1 year (November to November). The dealer did not have any 1971 plates and they did not have any 1970 Car plates left. The car was actually purchased on October 27, the dealer gave him a truck license plate to put on the car for 4 days. A Truck plate has the T as the first letter. MN License Plates T77-259 are original to this car.
The original owner drove the car for about 1 week and put it in a heated garage for the winter.
In 1971 the owner installed the SW Amp and SW Oil Pressure Gauges in the dash. Also in 1971 the owner took a several thousand mile road trip to Western Canada and back thru Yellowstone National Park and across Montana and North Dakota. It was on this trip while in Canada that a logging truck kicked up a rock that chipped the windshield. In fall of 1971 the car was again put in a heated garage. At that point it had around 7,500 miles on the odometer. Between 1972 and 2017 another 41,000 miles were put on the odometer.
The second owner picked up the car on June 29, 2017 with 48,654 miles on it. He proceeded to add 866 miles on it over 2 summers.
According to the original owner the following facts apply to the car.
The car is all original except for the tires, the mufflers, and the battery. It was converted to electronic ignition when that
conversion became popular.
All gauges are original and functional. The AM radio is original and still works.
The interior and mats are original.
The shoulder belts have never been used.
The car has rarely seen rain and was never driven in the snow.
The car had chrome valve covers at the time it was picked up.
Shocks and clutch are original.
The keys are original.
All glass is original.
All chrome is original.
The trim rings on the wheels are original.
The Ford Blue Snorkel air intake is original and it is believed that the filter element is original as well. The original owner put
the chrome air cleaner on to dress up the engine.
The car was purchased as a dealer showroom model and thus was ordered without many options. It is this lack of options that makes the car documented 1 of 1.
When leaded gas was phased out, the original owner switched to 109 octane racing fuel mixed 50/50 with non-oxy premium unleaded gas. The second owner has used the same fuel mixture and that is what the car is running on now!

FINANCING IS AVAILABLE AND TRADES WILL BE CONSIDERED. WE CAN BE REACHED AT 507-386-1726 OR EMAIL "SALES@UNIQUEMANKATO.COM"

.•••MN residents are responsible for tax, license and title procurement fees. Out of state buyers will only have a $100 Title Procurement fee, no tax or other fees charged.•••